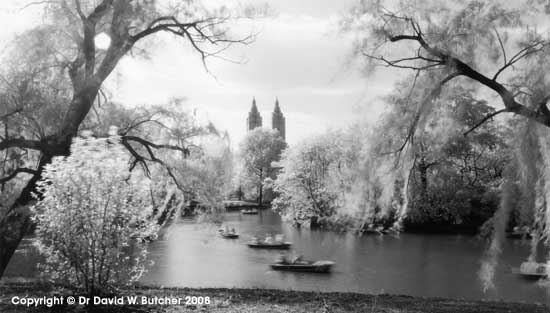 There are not many infra-red (IR) films available now so I describe here the use of Ilford SFX.

Ilford SFX handles like conventional film and produces moderate IR effects. In fact, it is Ilford HP5 with a different set of dyes to make it sensitive to near-IR. It has to be used with a special filter to see the IR effect in your negatives. In the absence of the special filter it gives results similar to HP5 rated at 200 ISO. It is available in 120 and 35 mm formats.

You must use a filter with maximum light transmission between 715 nm and 730nm to give the IR effect; a normal deep red 25A, for example, will not work. Heliopan 715, Hoya R72 or the Ilford gelatin filter work best.

The greatest effects are seen when there is a blue sky with a few clouds, trees and grasses that give off IR, such as Aspens, Silver Birch, or willows. Conifers don’t give off much IR so always appear dark grey. Blue skies will print as dark grey and the leaves on the deciduous trees, grasses, etc. will print light grey. In other words, it is as if you have used a red filter for the sky and a green filter for the foliage. However, shadow detail is typically greater than would be obtained with a deep red filter.

Infra-red can also be useful on hazy days since it cuts through it and can almost make it appear to be a clear day! It is essential to use a tripod with SFX since, although the film is rated at ISO 200 on the box, when the IR filter is used this needs an extra 4 to 6 stops of exposure, depending on how much IR is present. In other words, an actual rating of between 3 to 12 ISO should be used. I use manual adjustment of the exposure to add 6 stops to the exposure.

Use an aperture of f22 or f16 to avoid any focussing problems that will otherwise be seen (IR light focuses in a slightly different place to visible light).

Bracket exposures over a range of 3 stops or so since the recording of IR on film is rather unpredictable! Exposure times are often in the range 0.5 to 4 seconds at f22.

One last point: it is not possible to see through the IR filters as they allow very little visible light to pass through them. That means with an SLR camera you need to compose the shot before screwing the IR filter onto the lens. Rangefinder cameras are easier to use since you compose with a small viewfinder that does not look through the lens.

Processing: I process SFX films in the same tank as my FP4 films, so obviously they have the same development time and agitation! See separate Tutorial for full processing details.